American Tourister Carry On Review: Does Its Reasonable Price Equal A Good Value?

“American Tourister” is the official luggage of the Walt Disney World Resort & Disneyland. It comes in several styles and sizes. For true Disney lovers, there are fancy designs like Minnie Mouse print, for example, but I gave a simple blue 20-inch soft shell spinner called the “Splash” a spin. The only Splash variations available are a 24-inch version, a 28-inch version, and a few additional color options. Splash and I headed to Santa Barbara for a long weekend. Here’s what I experienced with the suitcase and what you should know before buying. American Tourister was started in 1933 in Providence, Rhode Island by a man named Sol Koffler. According to the company’s website, Koffler’s “dream was to build a tough suitcase that could sell for a dollar.” Since then, American Tourister has indeed established itself as a large, trustworthy, affordable luggage brand.

Key Features of the American Tourister Carry On

I have to admit: When I unboxed my American Tourister Splash and was bombarded by Disney branding and endorsement, it felt gimmicky. But the suitcase is anything but; in fact the best way to describe it would be “basic.” This is your standard soft-shell suitcase in many ways. The interior is a large bucket on one side with straps, and a large zipper on the lid. There are two nice exterior handles and two nice exterior pockets. The suitcase isn’t particularly sturdy, but it rolls just fine.

The biggest challenge with most luggage reviews is that there isn’t time to give the suitcase a full lifespan test. But that wasn’t the case here; my roommate tells me she has been using the same exact suitcase for years. And while she did originally buy it for the Disney branding, she raved about its durability. She’s taken it around the world and said it’s held up remarkably. Her only complaint, which I can now vouch for, is that the extendable handle isn’t particularly secure. But that’s unfortunately pretty common across brands. What to Consider Before Buying

With the America Tourister Splash, you’re getting a longstanding brand at a reasonable price. So if you’re looking for a basic bag, this is a great option. There’s not much to vouch for with regards to style or swag, but plenty to vouch for with regards to price and durability. I’d prefer the latter options anyway, so I’d definitely consider the Splash if I needed a new carry-on. 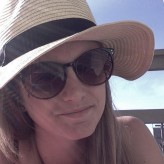 I write about tech, travel, money, gender and more — but I’m most interested in how those things relate to the big questions (and vice versa). My work and commentary has appeared on Forbes, Business Insider, CNBC, 7×7, The Bold Italic, Thought Catalog, Technical.ly, Mental Floss, MSN Money and others.

Ready to Purchase the American Tourister Carry On?